“Today is the day, the day  I’m going to make everything right”.

Of course, I didn’t say this, but these were the words I wanted to say. In fact, I wanted to climb on top of my desk and shout them out loud. But I didn’t. I just listened intently to the tapping of the rain on the office window and the occasional grunt from the other stony-faced police officers around me.

I had made it. I was a police officer, and not just any police officer, a newly appointed detective. The days of plodding around in a silly big hat, getting rained on, spat on, ragged around on a Saturday night; mostly by toothless partygoers who smelt of stale alcohol, urine and cigarettes, had finally paid off. I had finally ‘peaked’. I now had the opportunity to sit in a nice warm office, get fat and investigate the ‘juicy’ stuff. And yet, despite this, I felt a huge, unavoidable void. 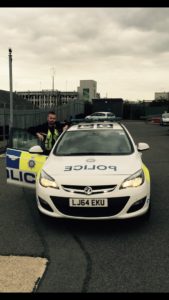 For all the satisfaction that my career success had provided me, I was occasionally haunted by the question of whether it was too late to be all that I might have been. Had I ended up here by choice, luck, or coincidence. The fact that I could not answer this question with any conviction worried me greatly.

The rain continued to tap on the window, heavier now. Today was the day I had to change my life, to walk away from the only job I know.

Policing had given so much to me: confidence, professionalism, structure, skill & judgment. It had taken from me too: a normal body clock, a sensible diet (and smaller waist), and occasionally the ability to sleep soundly at night. For all its pros and cons, a burning desire inside of me would not go away. Being a police officer had brought me into direct contact with poor and weak leaders; the type that fuel a burning desire in you to be better than them and make a difference; to stand up for your own, support, lead & inspire people to do fantastic and brave things, in sometimes terrible conditions.

Despite my doubts over the standard of some of my leaders, I loved policing; its complexities, quirks and frustrations. But mostly, I loved the ability to put right things that had gone terribly wrong, and to protect those that need protecting the most. As a police officer I had seen so many heartbreaking examples of good people losing out and suffering because of other people’s bad intentions or lack of care. I remember vividly the feeling of absolute uselessness as I stood in the home of a mother & her small children, watching their lives fall to pieces as I tell her that her husband, and their dad, would not be coming home again. I remember seeing the look in her eyes as my words crushed her. I will never forget that day, how I ruined their lives and felt so inadequate as I did it. There were many before them, and many after; each one of them taking a tiny bit of me with them. I often wonder if they remember me, as much as I remember them.

Suddenly, something changed in me. I began to recognise that these things were having an effect on me too. I didn’t like what I was becoming, and needed a helping hand. But when I looked over my shoulder, my leaders were nowhere to be seen.

These were the beginnings of what would become my year of hell, and a real test of my own mental strength. I was ashamed to admit it at the time, but the job had damaged me. I didn’t recognise myself, and did not even have the strength to get out of bed, let alone make amends. It took me some time to muster up the courage to ask the doctor for help. I felt weak. I was supposed to be the protector of the vulnerable, and here I am begging for help. I was lost, but eventually I was able to find the right path, and ultimately the right destination, although I was quite surprised where I found myself.

My terrible journey highlighted to me just how important good leadership, guidance and support is, and for the first time brought to the fore my ambition to leave the police and try and make a difference in secondary education. Surely I could use my experiences (even if some were very negative) to do good, to try and improve the life chances of our young people; guide and mentor them to become great citizens and compassionate leaders. And for me, eventually, I hoped to become the leader that I had needed that day when I looked over my shoulder. I want to be at the forefront of inspiring, developing and putting things right BEFORE they go wrong. But most importantly, I want to use my experiences to develop into a leader who demands a culture of teamwork. Rank and title have their purpose, but they should not exclude senior people from mucking in and being part of the team. We are all working towards the same goals, and hopefully all working equally as hard. If my staff are suffering, I should be too.

I had decided long before the day of the rain & the window that I wanted to leave the police and try and find my place in education (I just didn’t know where that place was yet). My onlys problem were; 1. I was now in my thirties 2. I had never really known anything other than the police service. 3.  I had never gone to university. Instead, I had chosen to go straight into public service. Would I even be useful to a school? Would they want me? Such thoughts, I thought, were unhelpful and I got to work altering my career path. I decided to turn those challenges into energy.

Leaving your paid job, and trying to navigate your way through unfamiliar waters is a tremendously scary thing. To best describe it, I turn to Elon Musk’s quote of, “chewing glass and staring into the abyss”. It makes for a good laxative, I can tell you.

I spent many months focusing solely on my mental health; trying to repair some of the wounds of my previous employment. I’ve learnt now that some wounds do not fully repair. I’ve learnt ways to cope and face the world again. Despite my earlier shame, I am now very proud of myself. I am not ashamed to say that I was broken, because I have overcome things which I can now use to help others. I see what I went through, however horrendous at the time, as muscle growth. Some things come from good situations, but  most great things come from adversity.

And so…. back to the day of the rain. On that day and through that curtain of water on the office window, I saw some clarity. Salary and pensions are important, I’ll concede to that point of view, but nothing is more important than getting out of bed each morning and being happy. Nothing is more important than taking care of yourself, following your ambitions and living without regret. I walked away from my police career that day. In dramatic style I’d like to say the rain stopped and the sun started shining, but it didn’t,  it carried on raining and I got drenched walking to my car. I think I stood in a puddle too. However, I walked away knowing, no matter what happens from this point on, and I accept that I could fail, I will have no regrets.

Despite my leap of faith, and the fact that some days I still feel like a fish out of water, I haven’t failed yet. I have managed to secure a fantastic role in a Leeds secondary school, where I can use my policing experience to help improve behaviour and prevent exclusions. I’ve also managed to put in place new strategies to help the most challenging and disadvantaged pupils integrate better into school, and improve their behaviour and self esteem. These strategies are based on work I have done to reduce re-offending in the criminal justice system, and have already produced positive results.

Here’s to an exciting journey ahead (and my second chance). May I never forget the importance of great leadership and how the task of protecting your troops at the coal face, taking time to know them well so that you may recognise when they need support, should never be taken lightly. Lead from the front, and never the rear.

You were put on this earth to be the best YOU that you can be. If you don’t do it, nobody else can. You can achieve anything, and it is never too late to be what you might have been.