‘There is nothing either good or bad, but thinking makes it so’, once wrote Shakespeare. He’d clearly never taught PE during his NQT year, to a bunch of Year 2s, during an observation, where two children had to be carted off with head injuries (true story). That was completely and utterly bad. Or, at least, it felt like it at the time. In hindsight, the head injuries were only minor (nothing an ice pack couldn’t fix), my mentor joked about the car-crash of a lesson after (basically, nothing could be that bad again, so the only way was up!), and I now look back on that experience and appreciate how far I have come as a teacher. The actual lesson hadn’t changed (it was still an objectively crap lesson) but my perspective has changed (positives came out of the experience). Our perspective is crucial for how we feel about, well, everything.

How we view the good and bad things that happen in our lives is largely determined by our explanatory style. That is, how we explain things to ourselves. For example, at the time of my PE lesson, I was having thoughts like, “I’m a rubbish teacher”, “I can’t do this”, “My mentor can now see how crap I am”. Basically, I was explaining it to myself in a very negative and counter-productive way and, understandably, so. The problem was, those thoughts were not helping me get any better. In fact, they were affecting what I was feeling (dejected and hopeless) and they were affecting my behaviour (giving up, not trying to improve). The experience of the PE lesson spilled over into other subjects too (“My English lesson will be a disaster too!”) and I was also having lots of thoughts about leaving teaching at this time. At the time, I had no idea that these thoughts may have been inaccurate and misleading – they felt like the truth.

Clearly, the thoughts I was having were extremely pessimistic. By that I mean that I was expecting the future to turn out badly for me. I genuinely felt quite hopeless at this point in my NQT year. And the more hopeless I felt, the more I looked for and found evidence to confirm that maybe teaching wasn’t for me. What I needed to be able to do was break out of the habit of seeing things so negatively. 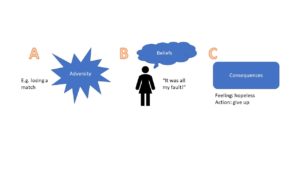 Fortunately, back in the 1960s, a psychologist by the name of Albert Ellis, had devised the ‘ABC Model’ which showed that our emotions aren’t necessarily caused by events (a crap PE lesson) but more by our beliefs about the events (“I’m a rubbish teacher”). One of the most insightful parts of the ABC model is the realisation that we have some choice over our thoughts and beliefs. And these in turn then affect what we feel and how we behave. Ellis’s work is credited as being a precursor to Cognitive Behaviour Therapy (CBT), and a core part of CBT is challenging unhelpful and unrealistic thoughts, and replacing them with more accurate ones.

Explanatory styles and our ability to be flexible with our thinking are important because both affect our levels of optimism (and pessimism). But does it really matter whether we see the glass as half-full or half-empty? Well, yes, it does. Very much so. Studies have shown that optimistic people tend to:

But, let’s not get carried away. Being too optimistic has its downsides as well. Overly optimistic people can have difficulty sizing up situations realistically and ignore important pitfalls, and they can make unwise decisions (e.g. investing heavily in the stock market at highly volatile times).

So, when we are talking about being more optimistic, we should be aiming for ‘realistic optimism’. Professor Paul Dolan explains that this is when “we should expect the best but have a contingency plan for the worst.”

One example from psychology of being flexible with our thinking is known as ‘reframing’. This is where we consciously ‘reframe’ a negative situation (disaster PE lesson) into a positive one (it’s now a funny anecdote and no one died!). Harvard Business School psychologist, Professor Alison Wood Brooks, has conducted a number of experiments on a type of reframing she calls ‘anxiety reappraisal’. Brooks got her participants to do a range of scary things (like public speaking and maths tests). She found that when the participants reframed their nerves as ‘excitement’ rather than ‘anxiety’, their performance improved. This is certainly a technique I could have used more in my NQT year when I used to get extremely nervous (or was that excited?) before observations.

But the fact is all life experiences can be seen from different viewpoints. Every situation and experience can be reframed however we choose. As the Dalai Lama says in The Art of Happiness, “One must realise that every phenomena, every event, has different aspects. Everything is of a relative nature.”

Like a lot of teachers, I still get anxious about school stuff and, from time to time, suffer from sleepless nights and ruminating thoughts. Workload can get on top of me, as my limited time is swamped with my endless to-do list. But one flexible thinking technique that really helps my sanity and wellbeing is being able to ‘see the bigger picture’. What I mean by this is that I really try to hold on to what’s important to me, what is meaningful to me.

The year before I retrained to become a teacher, my brother was involved in a near fatal car crash. A fractured skull, punctured bowel and multiple broken bones meant he was in hospital for a long time, requiring several operations. At that time in my life, nothing mattered more than my big brother getting better. My family were very lucky in that he made a full recovery (God love the NHS!) and I am eternally grateful that he is alive, that I went on to be the best man at his wedding and I am now an uncle to his little boy, Luca. Why am I mentioning this? Well, I use that awful event now to help me put things in perspective. When I have a dodgy observation, or a lesson goes belly up, or a parent complains, yes it gets to me but I’m able to see the bigger picture. I count my lucky stars that Neal is still here and, you know what, big deal that I forgot to give out homework on Friday!

The moral of the story 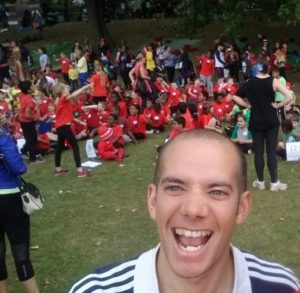 So, I guess the point of the blog is to be aware of your thoughts. You don’t have to overly analyse them. Just be mindful that they’re not always accurate and they’re certainly not facts. Know that you can choose to be flexible with your thinking and see things from a different perspective. Realise that it can be really helpful to be optimistic but also have back-up plans in case things go wrong. And always keep in mind the bigger picture. Know what’s important to you and let that guide you. How do I know this works? Well, I eventually became the PE co-ordinator in my last two schools. Anything is possible.

Adrian’s new book, Wellbeing in the Primary Classroom, is published by  @BloomsburyEd