Through a series of events that I still don’t fully understand, last weekend I found myself nearly 300 miles from home, in Rhyddngs Business and Enterprise School in Oswaldtwistle, standing in front of about a  dozen people who were kind enough to choose to come to my workshop on the Wellbeing Paradox. The what? If you’re going to run a workshop, you’ve got to have a schtick, right? And my schtick at the moment is this; I talk to people about wellbeing ALL the time. No really, all the time. There is a common thread that runs through all of these conversations. People who are interested in wellbeing have, almost without exception, had some kind of crisis point in their own wellbeing, either mental or physical. That’s when they get interested in it. Now this bothers me because surely there is something we can do to reach people before they reach crisis point?

So my first stop on this tour of wellbeing was to look at why this might be the case. Study after study shows that people become teachers for what can only be termed altruistic reasons, most of which would come under the general heading of “wanting to make a difference”. So why does the system take this intake of altruistic, passionate people, chew them up and spit them out, at a frightening rate? You’ve probably seen this table before – 25% of new entrants leave teaching within the first three years. 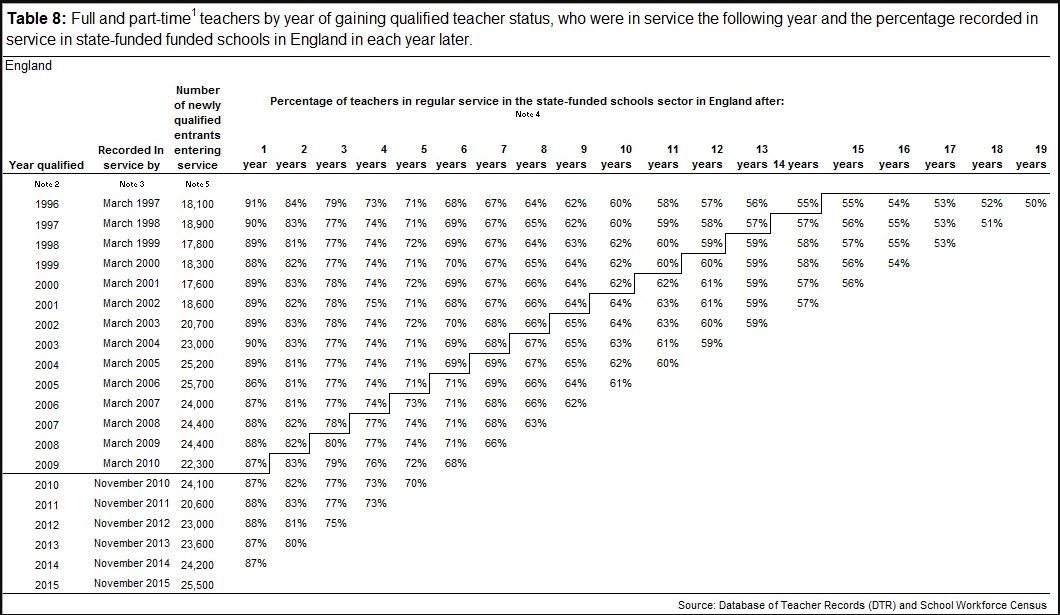 One of the many items I nearly included in my presentation.

I  wonder, and I haven’t been able to find any figures on this, how many people are in the figures as “leaving” when in fact they cannot find a contract to complete their NQT year. I hear about this happening a lot, but maybe it’s just the company I keep. The South West was identified in a recent EduDataLab report as one of the areas where a large number of NQTs don’t join a state school after achieving QTS.

Anyway, what happened was, and this is my inexperience in presenting to adults on show here, I had woefully underestimated the amount of time this analysis would take. I felt that an analysis was needed, so that we could identify what we, as teachers, can and can’t influence.

@MrHeadComputing  described my session in his blog as “gloomy” and he was quite right. This really wasn’t my intention – I had intended to move on to how we could mitigate and indeed overcome some of these factors, I did talk a bit about habits and how they work against us, and how we can leverage them by making small but significant changes, but I didn’t get to discussing much positive action.

Where the session was probably more useful for me than the participants (sorry, folks) was in refining my ideas about how circumstances might be working against wellbeing and how close to the mark and to other people’s experiences I might be. I’m working on a 3 part model. I do love a bit of alliteration, so let’s call it the 3S model.

SYSTEM (For example; the DFE, finances, Ofsted, curriculum.) Very little we can do to influence or change these in our day to day work.

SETTING (For example; leadership team, fear of Ofsted, MAT/LA) Some colleagues will have some influence over these.

SELF (For example, perfectionism, personal circumstances, experience). While some of these will be out of our hands, we do have more control in this area.

I was lucky enough to have some senior leaders in the room so we were able to discuss how the attitudes and personalities of the leadership team impact on staff wellbeing and workload. We also talked about consistency and how that can stifle autonomy, a key factor in keeping people in the profession. We touched on the cost of recruitment and how it makes much more sense to develop the team you have than recruit a new one.

As we ran out of time, at what was planned to be the midpoint of my presentation, we looked at the wording of the teacher’s contract. Many thanks to @Provokedpedagog whose recent blog on this site inspired me to think about the concepts of “reasonable” and “effective” in some detail. 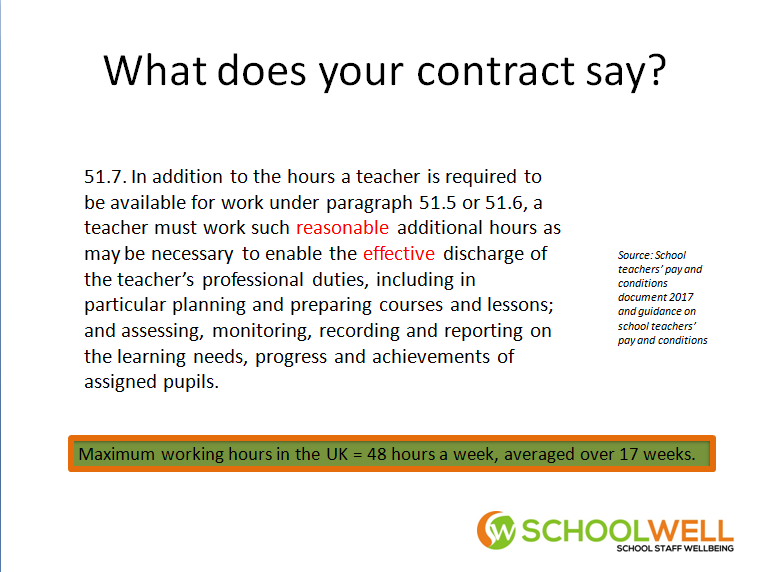 I invited people to think about whether the activities on this grid were reasonable or effective for them, and we discussed the fact that reasonable and effective look different for different people. 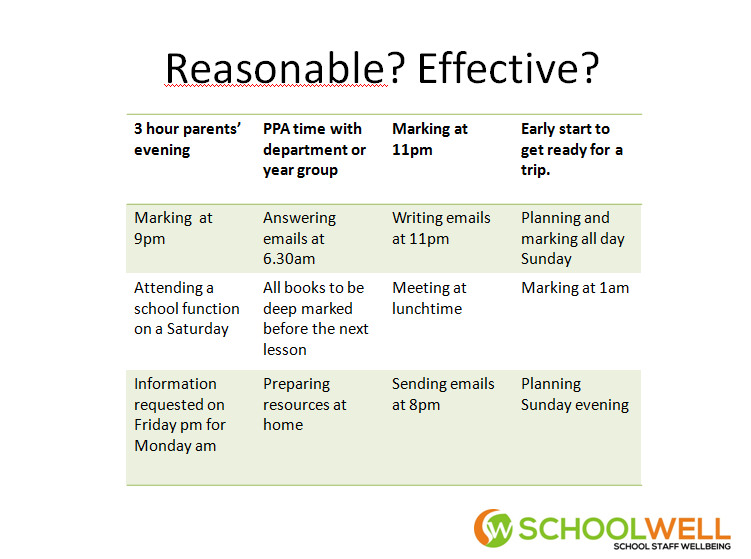 I can’t thank the participants enough for their engagement and enthusiasm, especially straight after lunch. I learned a heck of a lot. Special thanks to @MrHeadComputing  for making notes on his rather impressive iPad.

I am only sorry that I didn’t send them away with a more positive message, but at least they got a mint and a biro.

Setting up for my #LLL17 #wellbeing session. pic.twitter.com/kLYtBdXVVB